To some, TV is now a relic. It’s had its day, and they’ll be damned if they’re going to sully a pitch with such basic, “traditional” media. This is the era of the mobile-first, digitally native consumer, after all.

Perhaps this was always inevitable in an industry where the average age of employees is 34, with just 6% aged over 50 (compared to nearly half of the wider population).

But regardless of age bubbles or echo chambers, the best media planners know the importance of standing in different shoes; they leave their own biases at the door and develop strategies best suited to the target audience. For them, TV remains a staple of effective strategising. Let’s delve further into why.

According to Thinkbox, 71% of the average UK adult’s video day is spent on a television set, with broadcast TV accounting for 80% of that time, compared to 12.6% for SVOD and 5.9% for YouTube. 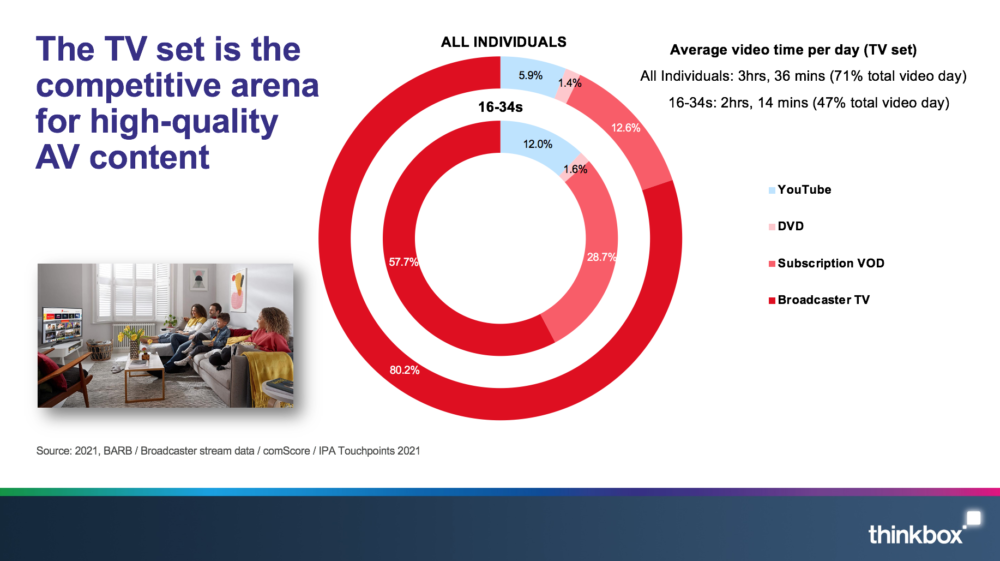 As you can see, the picture changes completely when switching the lens to 16-34s, with SVOD and YouTube playing more prominent roles in the average day to highlight the difference in viewing preferences between age groups.

This divergence reinforces the point that media plans must be tailored to the audience – there is no one-size-fits-all strategy.

When targeting younger adults, for example, brands can maximise reach by opting for a plan that combines linear TV and BVOD; conversely, this tactic is less necessary if the desired viewership is older, as the below diagram illustrates.

Think of it in terms of a sliding scale: the younger your customers, the higher the allocation of budget to BVOD and YouTube; the older they are, the greater your linear TV spend.

But what about cord-cutting?

It’s true: subscription video-on-demand has changed the terrain… to an extent.

According to data from BARB, 66% of UK households now have a subscription to at least one of Netflix, Prime or Disney+. Yet, instead of signalling the death of traditional TV, SVOD platforms are viewed more as a supplement – a nice back-up for when there’s nothing on live TV, or a go-to for film night.

To elucidate on this further, the below graph demonstrates the effect SVOD has had on viewing time for different sources of audio-visual content. 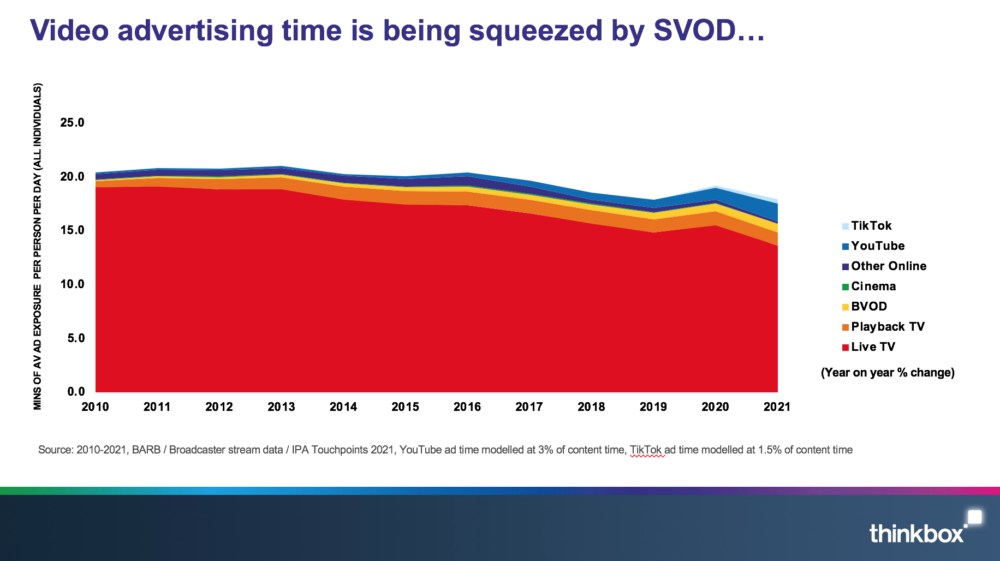 The elephant in the room, of course, is Netflix. With the streaming giant rumoured to be strongly considering the adoption of ad-funding to address drops in revenue, the boon this could give to the advertising industry – and TV in particular – would be significant.

For now, this is all conjecture. Regardless, while SVOD has had an impact on the amount of television we watch, the reality is live TV remains the best option for generating high levels of reach. 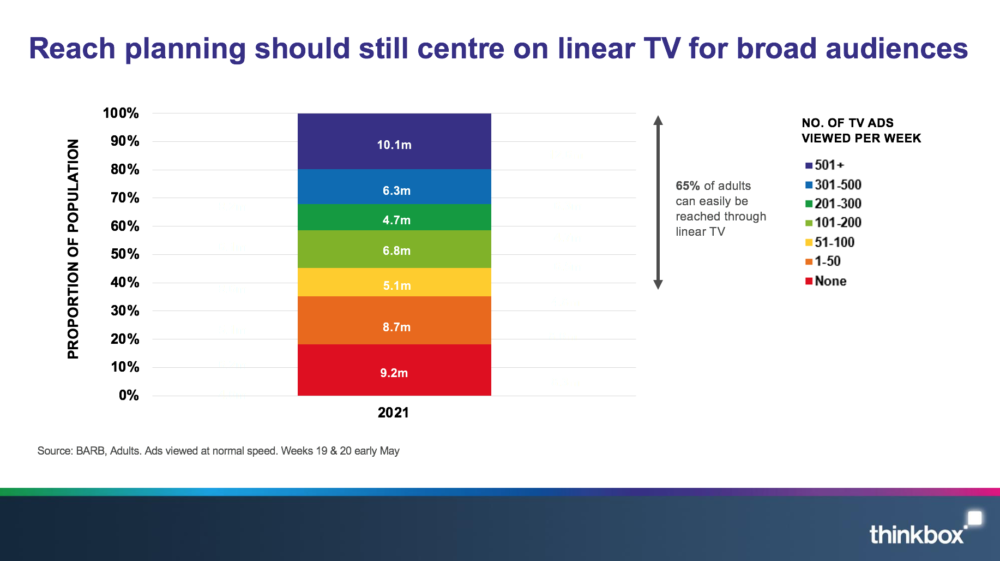 And that’s not the only string it has to its bow.

If businesses want to scale up quickly, there’s no better tool for the job than television advertising. According to Thinkbox, 68% of adults see over 50 TV commercials a day; it accounts for 91% of all video advertising that is seen, with commercial TV representing 38% of the average person’s media day.

This coverage facilitates scale at a faster rate than any other media, as one second-hand car brand discovered: 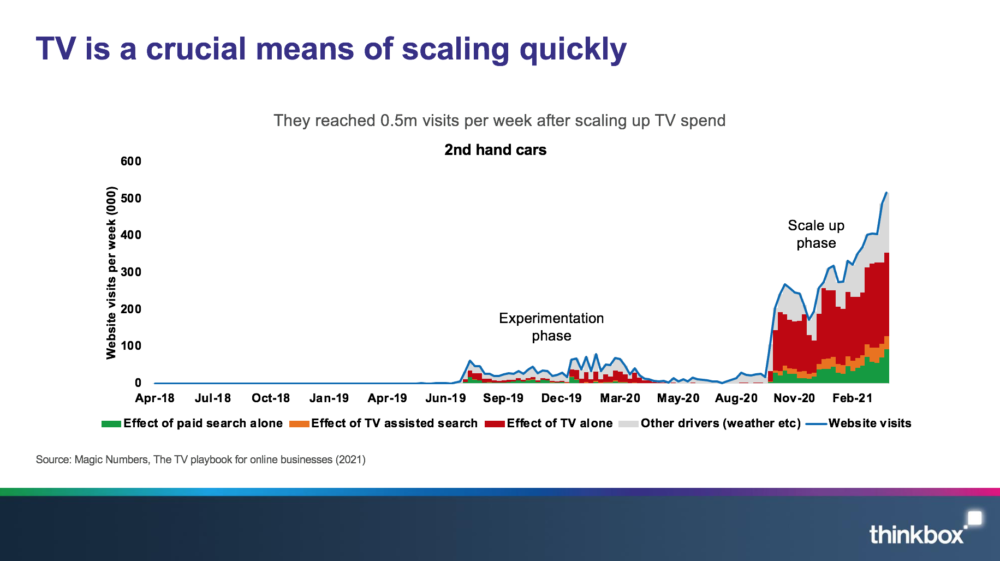 The significant upsurge in web visits is in part down to TV’s propensity to drive search, especially for online-born businesses, which now account for 20% of the TV market and have grown their spend by 37% since 2019.

This interaction drives down Cost Per Clicks and Conversion, primarily because people are searching directly for a brand instead of a category, which is significantly more expensive; in fact, 66% of all web traffic derived from TV advertising comes courtesy of organic search or direct URL, which cost the advertiser nothing.

Crucial to conversion rates, of course, is the extent to which consumers understand the benefits of a product; here again, TV leads the way, building awareness and providing the creative space for narratives to take shape. This increased awareness also has the added benefit of laying the foundations for long-term efficiency – a reality boosted by TV’s great value for money when compared to the likes of online video: 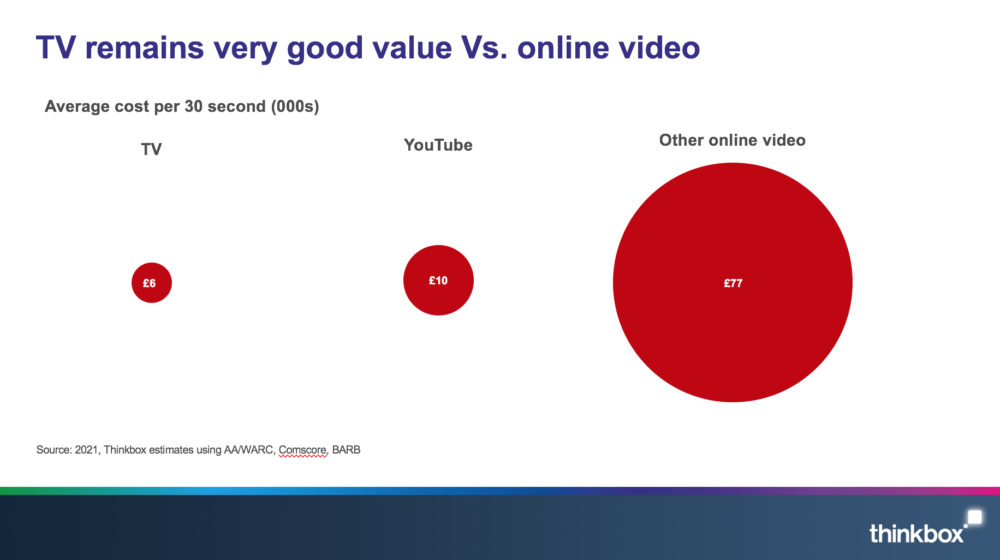 Advanced TV promises an exciting future for the market

Television is no longer just a live schedule transmitted through a screen in the living room; it’s matured into a network of interconnected platforms that each serve different brand needs. CFlight, a new collaboration between the UK’s major sales houses, plus Thinkbox, BARB, Clearcast, RSMB and TechEdge, brings linear and VOD under one unified system of measurement.

It permits brands to leverage first-party data and construct customised audiences – including geo-targeting – to further enhance the effectiveness of campaign strategies; and all within one simplified buying process. This means combined impacts and impressions, reach and frequency, and comprehensive exposure measurement across all devices and platforms.

To find out more about the bountiful opportunities available to your business through the power of TV, contact our experts today.