The New Age of Solo Travelling

Britain is going it alone – and in more ways than one.

According to a recent Saga survey, 32% of people said they had been on a solo holiday or were planning to do so in the next two years. ABTA reports that the past seven years have seen a 150% increase in bookings for solo travellers.

A separate study from YouGov found that 31% of ABC1 adults and 28% of those in the C2DE bracket have been solo travelling – suggesting that a person’s socioeconomic status is not a key factor in whether they go solo.

There does seem to be a particular appetite for singles getaways among Londoners, however, with 41% claiming to have taken a trip away on their own; the next closest is Scotland (32%). Research from CLIA also suggests that female travellers (39%) are more likely than males (26%) to go solo travelling.

People aged 65+, for example, are unfortunately more likely to find themselves widowed; a reality that puts responsibility on brands to adopt an empathetic, reassuring approach to sales and customer service as many customers take their tentative first steps in solo travel.

Another prominent sub-demographic on the scene is divorcees aged 50+. Unlike those over the age of 65, they’re more likely to want a hearty side helping of friendship and romance with their adventures.

Then there’s the uncouplers: people happily married or co-habiting, but who perhaps desire a bit of alone time, or want to go to a destination their partner does not fancy.

Recent research from Hitwise found that ‘solo travel’ searches have increased by 143% over the last three years. 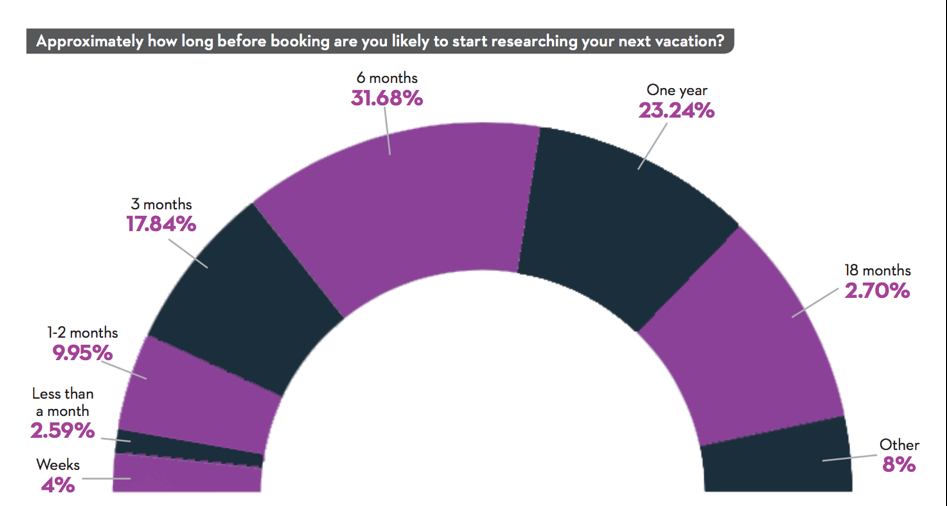 What’s more, a study by Solotravelerworld.com found that 32% of lone holidaymakers start planning their journey 6 months before departure. This highlights the importance of being present at this key touchpoint in the early stages of the consumer decision journey, where research, information and awareness are the name of the game. Brands should seek to inspire, educate and assure.

Among the reasons why people opt to travel solo, the freedom to choose their own agenda comes out on top with 85%. Meeting like-minded people (72%), enjoying time alone (66%) and the sense of adventure (44%) are also cited as the main drivers.

However, 60% of solo travellers believe that the current market does not adequately cater for their needs, with only 38% of those who have travelled alone saying they will do so again. 52% would consider an escorted tour, the popularity of which rose from 21% to 46% among solo travellers between 2013 and 2015.

Perhaps unsurprisingly, price is the biggest consideration for the UK’s rising number of solo travellers, with a third stating that they felt disadvantaged by opting to travel on their own. This suggests that tour operators and travel agents need to do more to provide individually-tailored packages; low deposits, flash sales, discounts and even Visa assistance are other tactics being employed by brands such as Just You, Intrepid and Solos Holiday.

Destination is just as crucial. Spain, Italy and France remain the most in-demand locations for overseas solo getaways, though travellers are increasingly training their lens further afield. Costa Rica, South East Asia and New Zealand are all popular solo travel searches, according to research from Hitwise; with Airbnb citing Cancun, Ho Chi Minh City, Cologne, Playa del Carmen and Johannesburg as destinations that have all seen treble-digit increases in lone-room bookings.

For female solo travellers, the top 10 destinations include Nicaragua – a country that has just been taken off the Foreign Office’s banned travel list – South Africa, Bulgaria, Sri Lanka, Macedonia, Portugal, Tanzania and Romania. Indeed, once viewed as a dangerous pursuit for women, solo travelling is now regarded as an opportunity to find oneself amidst new cultures and environments free of life’s usual mundane stresses.

46% of solo travellers claim to travel more than three times a year, making a varied choice of destinations key to brand loyalty. What’s more, with the vast majority of solo bookings being submitted in off-season – namely May, October and November – widening the selection of locations enables operators and travel agents to deliver appealing products all year round.

Riviera Travel is one example of a tour operator investing in the destinations it offers to experience-hungry solo travellers. Its 2019 programme, ‘For Solo Travellers’, now includes new locations such as China, Morocco, Sicily and Croatia, with a £1 deposit further incentivising bookings. Wendy Wu, Titan Travel and Leger Holidays are just some of the other brands that have introduced single traveller packages in 2019 – expect more to follow suit!

Asked what they would like more of as a solo traveller, 81.5% of respondents to a recent survey cited ‘tours, cruises and resorts with no single supplements’; this was followed by ‘hotels with single rooms or rates’ (81.07%) and ‘more single supplement-free cruise options’ (50.3%). 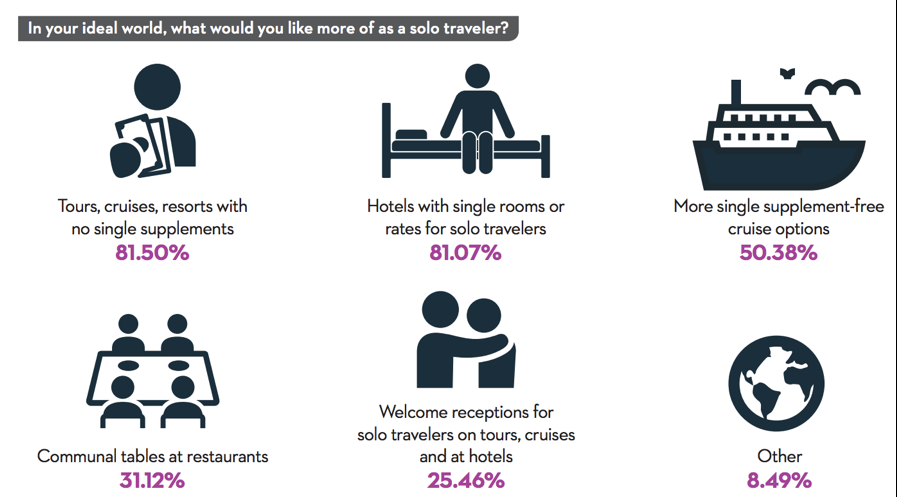 The type of holiday is also important. Escorted tours (47.15%) and city breaks (42.69%) lead the way for solo travellers, though the growing preference for walking holidays (40.70%), river cruises (33.97%), beach breaks (31.5%) suggest there are opportunities for brands to tap into new opportunities. 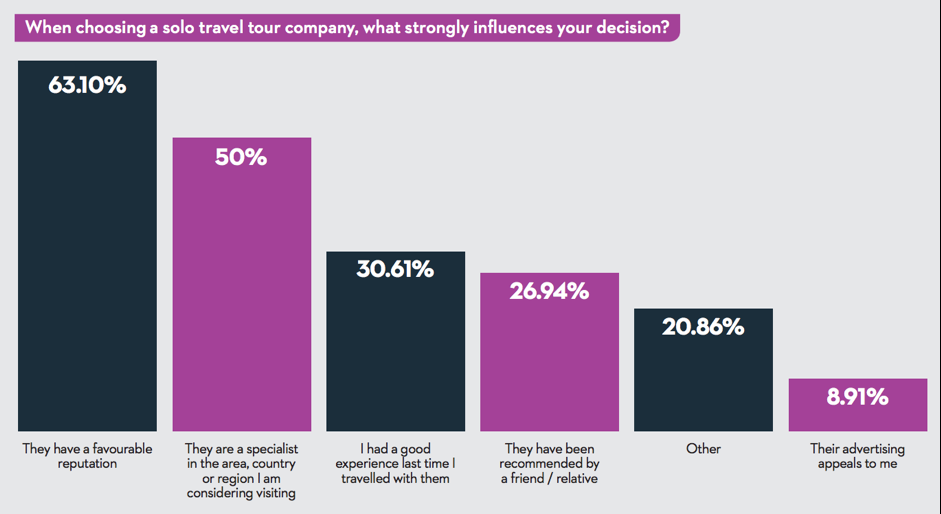 Ultimately, brands looking to capitalise on the solo travelling market have to invest in the relationship they have with their customers. Every aspect of their business must engender trust; loyalty schemes, travel guides, strong social media presences and on-the-ball customer service are all mandatory. Moreover, tour operators should ensure that bespoke packages encompassing flights, hotels and even activities are available and prominently positioned in search and on websites.

Finally, with 50% of solo travellers citing specialist expertise as a key decider in who they choose to book with, brands need to focus on being educators. We use the internet to fill in knowledge gaps and inspire new ideas; tour operators should endeavour to position themselves as a valuable resource of information, both online and offline.